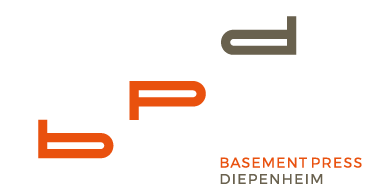 Hot off the Press

Contact day for members of the Graphics Platform at BPD

On Saturday afternoon, May 14, 20 pairs of eyes viewed the work of the new members. Wim van Broekhoven exhibited his, by virtue of power and size, impressive gum prints and Erna Mulder exhibited her etches, in which visual curiosity and image research were pleasantly visible.
Work by BPD artists was also exhibited: Inge van Noortwijk, Frank Haafkes, Marion Bouwhuis, Wendela de Vries. Twenty pairs of ears heard of Basement Press Diepenheim. Surrounded by Arno Kramer’s and Rinke Nijburg’s lithographic prints, ideas were exchanged about how to broaden the interest in graphic art, closing, of course, with drinks and bites.
In short: a success. 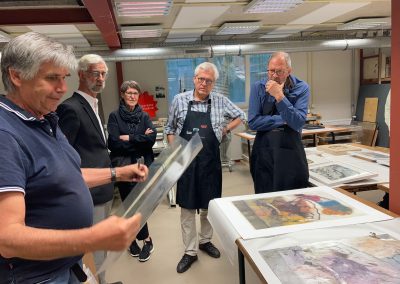 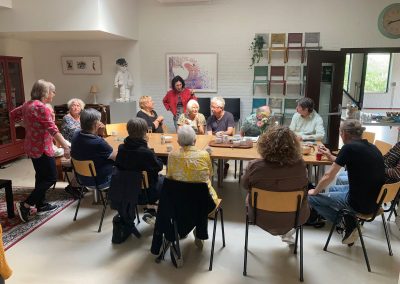 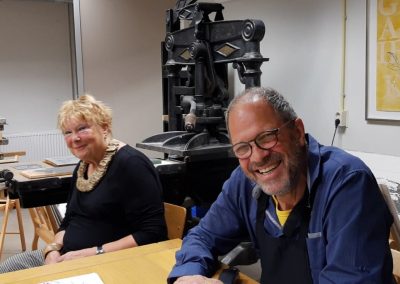 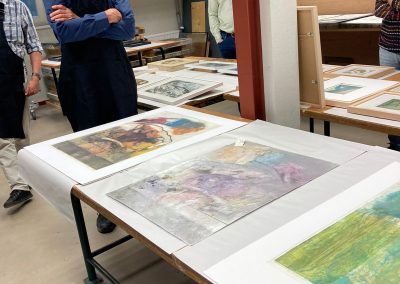 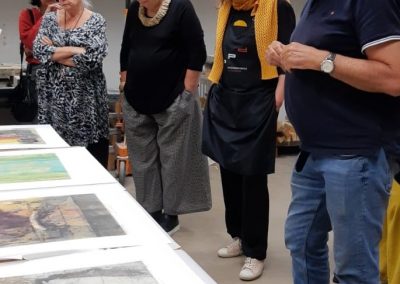 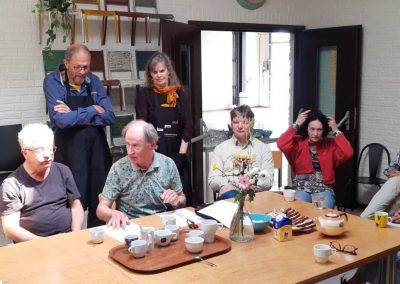 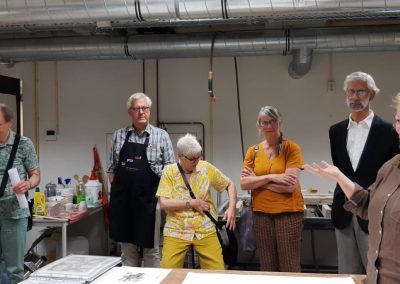 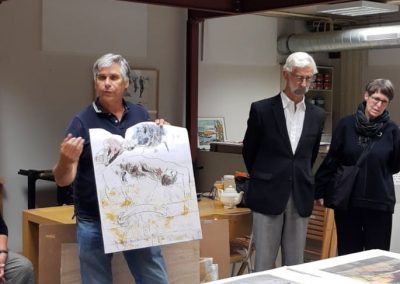 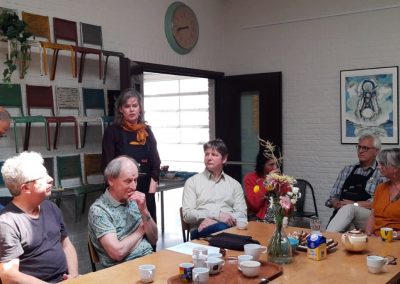 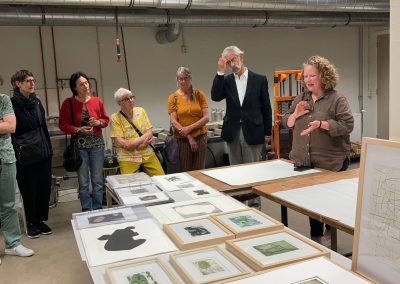 Looking back at the masterclass by Terry Thompson

At the beginning of November, the first masterclass, entitled ‘Between intuition and rationality’ took place at the Basement Press Diepenheim print studio. This masterclass was led by Terry Thompson, who not also draws, but is also sculptor and painter. He has often used the lithography technique as a deepening element in his work.

Through the eyes of the ‘master’ your own work changes. Drawing on the stone seems limiting in a sense; the stone is not flexible, the grain is stubborn, the tools with which to draw are limited and the result is not immediately visible and dependent on a next step: the printing.

But each of these steps has its own magic: how do you let yourself be taken along in the flow of the process, do you dare allow your intuition to affect the experiment, where does rationality contribute to determining what happens and what ultimately ends up on the paper? Terry summarized it nicely in a sentence that left a deep impression on me: “What do I want to show there?”
In the many lithographs that were created like this, from very intuitive and almost with eyes closed, to a searching way of drawing with fragile lines or experimentally combined with colored areas, you saw a spontaneous reproduction of everyone’s inner world appear.

Breaking free of the stubbornness of the technique as opposed to the sometimes amazing lucky breaks and gifts, all influence ‘what I want to show there’.

The Leids Prentenkabinet has recently purchased three lithographs. The works were issued by Basement Press Diepenheim and printed in the print shop in Diepenheim. The purchase comprises two recently made lithographs, among which the Annual Print by Rinke Nijburg and a work by Arno Kramer. 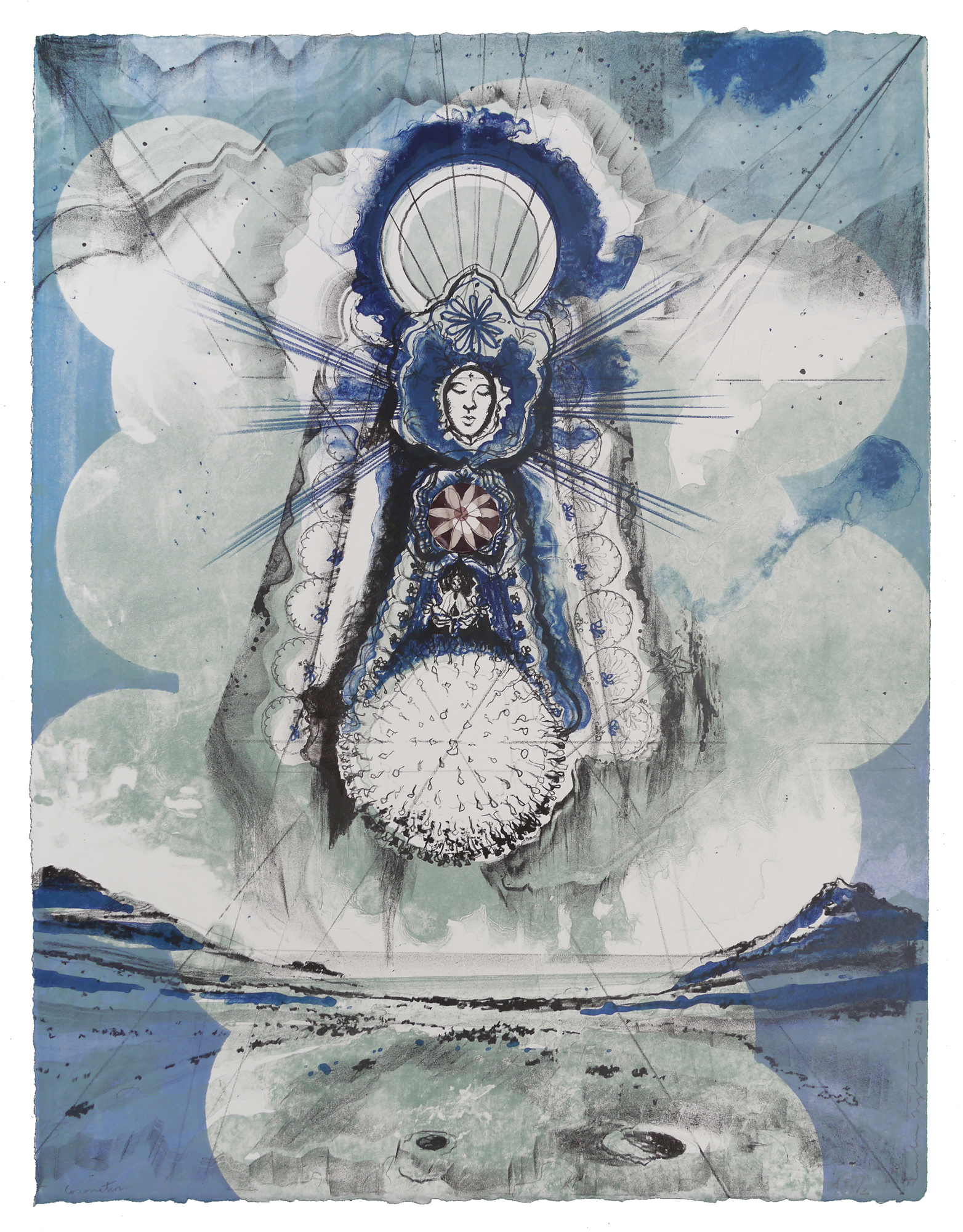 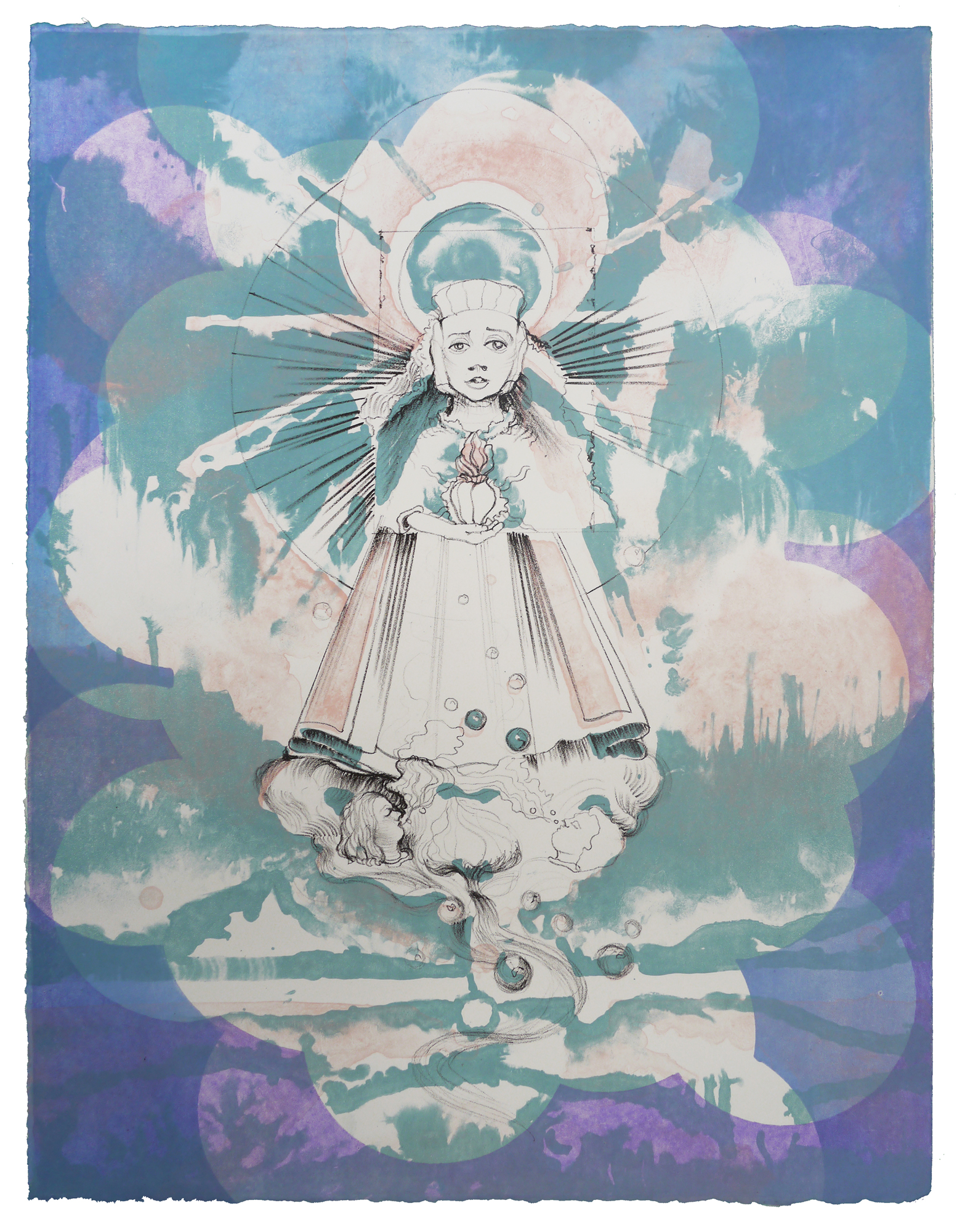 With enthusiastic interest from many, among which our Committee of Recommendation and our Friends and Contributors, we celebrated our fifth anniversary on October 16, 2021. It was exactly five years ago on that day that Basement Press Diepenheim saw the light.
A part of the gathering was the presentation of our Annual Print, made by Rinke Nijburg. This was made possible by a generous donation from the Madeleine Fonds. 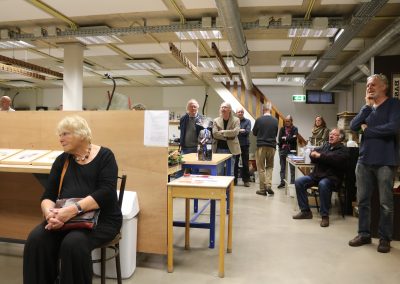 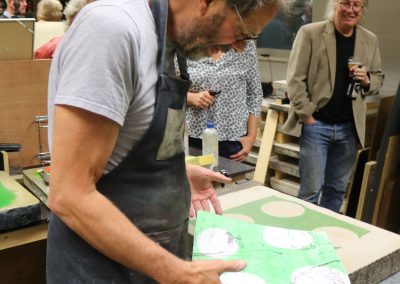 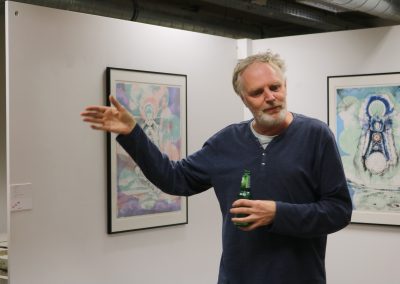 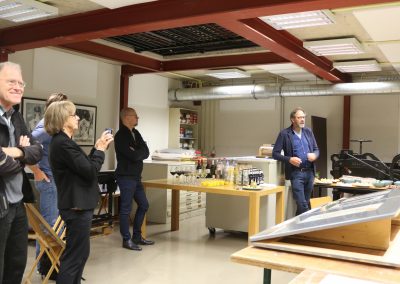 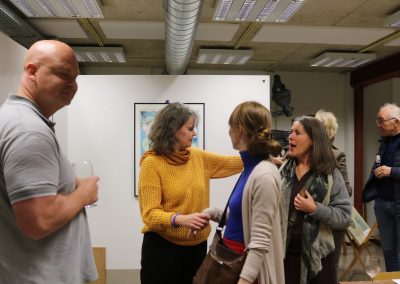 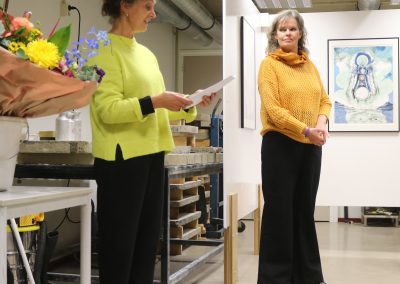 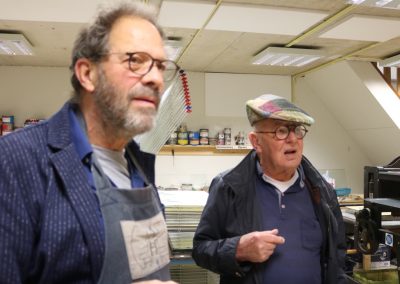 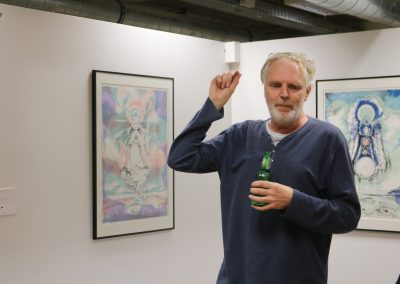 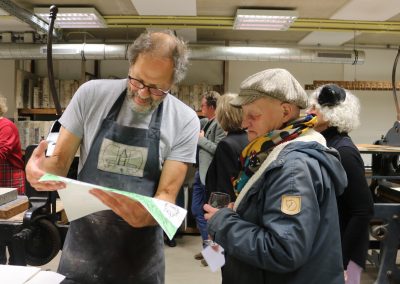 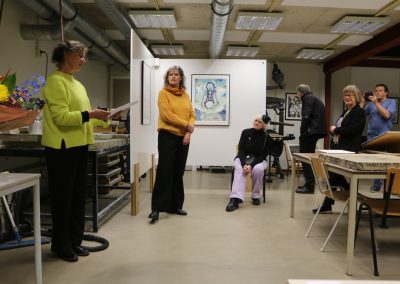 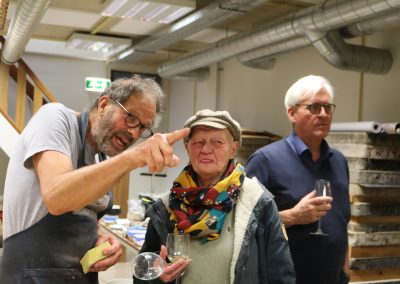 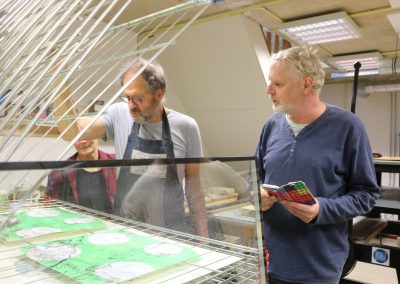 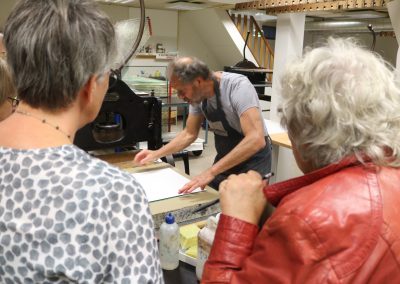 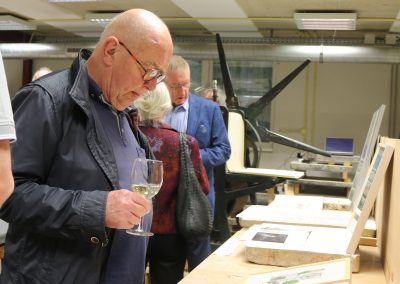 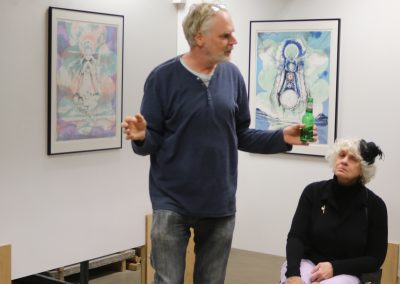 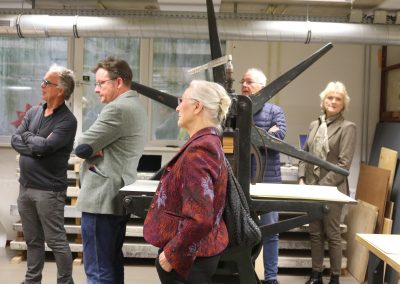 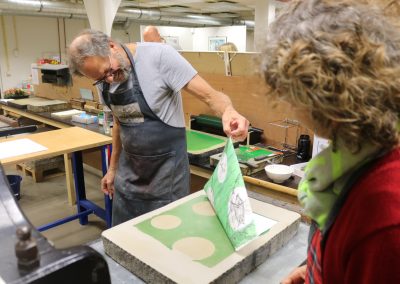 Restoration of the Piet Clement press

We have five historic presses at our disposal. One of the presses comes from the renowned print shop owned by Piet Clement in Amsterdam, the Karl-Krause lithography press no. 39396, built in 1905 in Leipzig, Germany. Various famous artists, among whom Paul Citroen and David Hockney, had their work printed by Piet Clement. This press can no longer be used, and has to be restored. The proper functioning of all our presses is crucial for the continued existence of BPD because our income depends on the number of people who can come print in our print studio.

Aside from a generous contribution from the heirs of Clement and our own contribution, we have also received a contribution of 2000 euro from the Prins Bernhard Cultuurfonds Overijssel to completely cover the restoration costs.

Over the past weeks a lot of hard work has been done to complete the new Annual Print. This year this unique lithograph was made by Rinke Nijburg. Every Friend of BPD will receive a numbered copy in appreciation of their support.