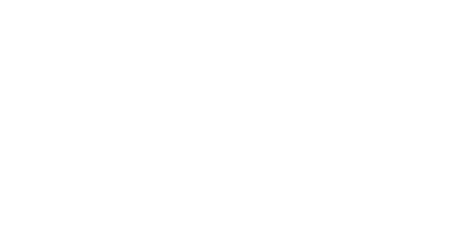 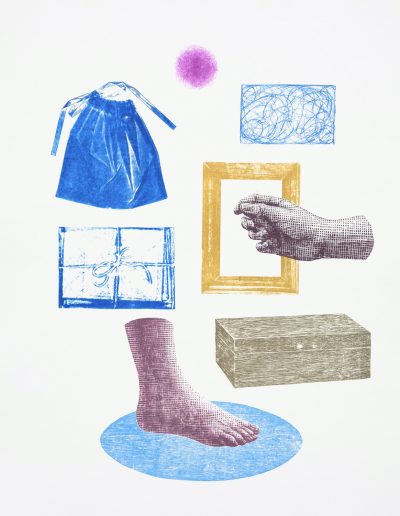 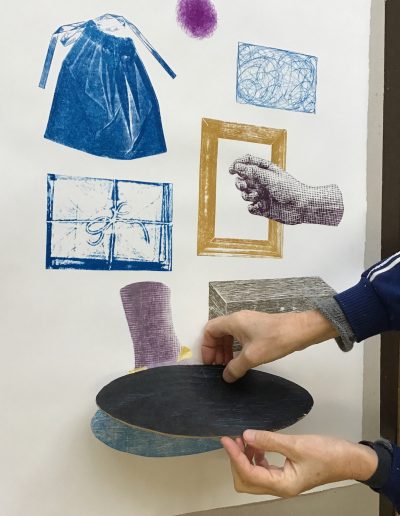 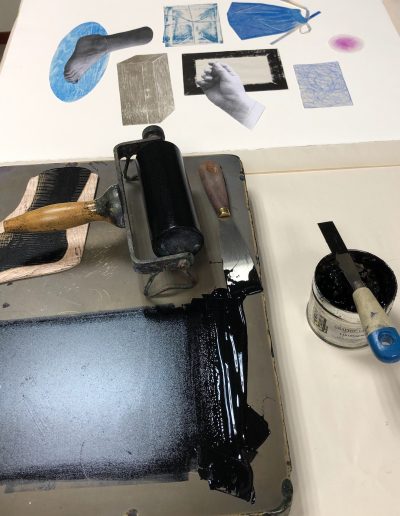 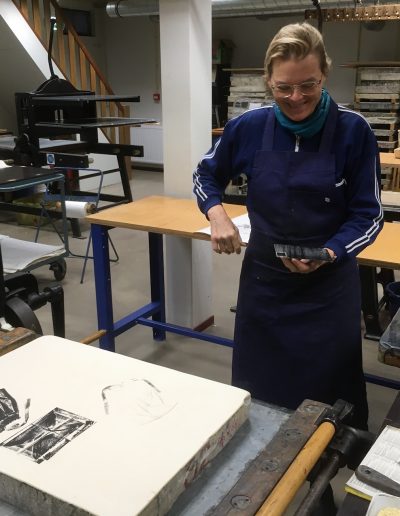 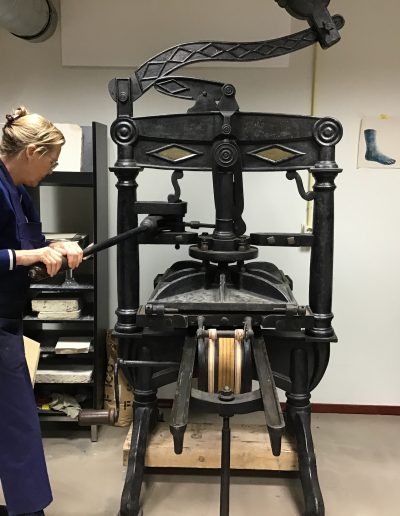 During an orientation visit at Basement Press in 2019, Aad suggested that I come work at the print studio and that I would start using the antique platen press. The idea of printing my woodcuts on such an imposing press appealed to me.

A second reason for going to Basement Press was that I wanted another opportunity to work with Aad. I really liked the combination of making lithographs and woodcuts and it provides new possibilities that I wanted to look into further. My plan was to make a combined print with seperate elements/objects that each have their own expression, some elements in lithography and others in woodcut. Lithography gave me the possibility to realize material printing technique in a print run and to use the specific expression of the crayon lithograph.

The platen press is a handy press if you, like myself, work with separate stamps; the printings don’t shift.

After arriving at BPD, the platen press was assembled with Willem’s help and a hoist. During the period I was working there, we were continuously making adjustments, which we never got quite perfect. The pressure remained unevenly distributed. I made many test prints of my woodcuts, but didn’t dare make a print run. In the end I printed the woodcut part of the print in my own studio.

The intaglio press in which I originally didn’t have much faith, worked just fine. Aad and I made four sample prints of material printing technique on the stone. The first proof came out well on the first try. Unfortunately we didn’t write down the composition of the ink and the strength of the etch, because after that we weren’t successful at getting an equally good result. We tested a number of possibilities: with transfers, without transfers, directly on the stone, indirectly with transfers made on the intaglio press, but not one of these proofs was as nice as the first. Must have been beginner’s luck. In the end I was satisfied with the results of the stone that we used for the edition.

The period I worked at BPD was mainly interesting for me because of the experiments with the material printing technique and, not in the least, because of the acquaintances I made with the people who were also working there. 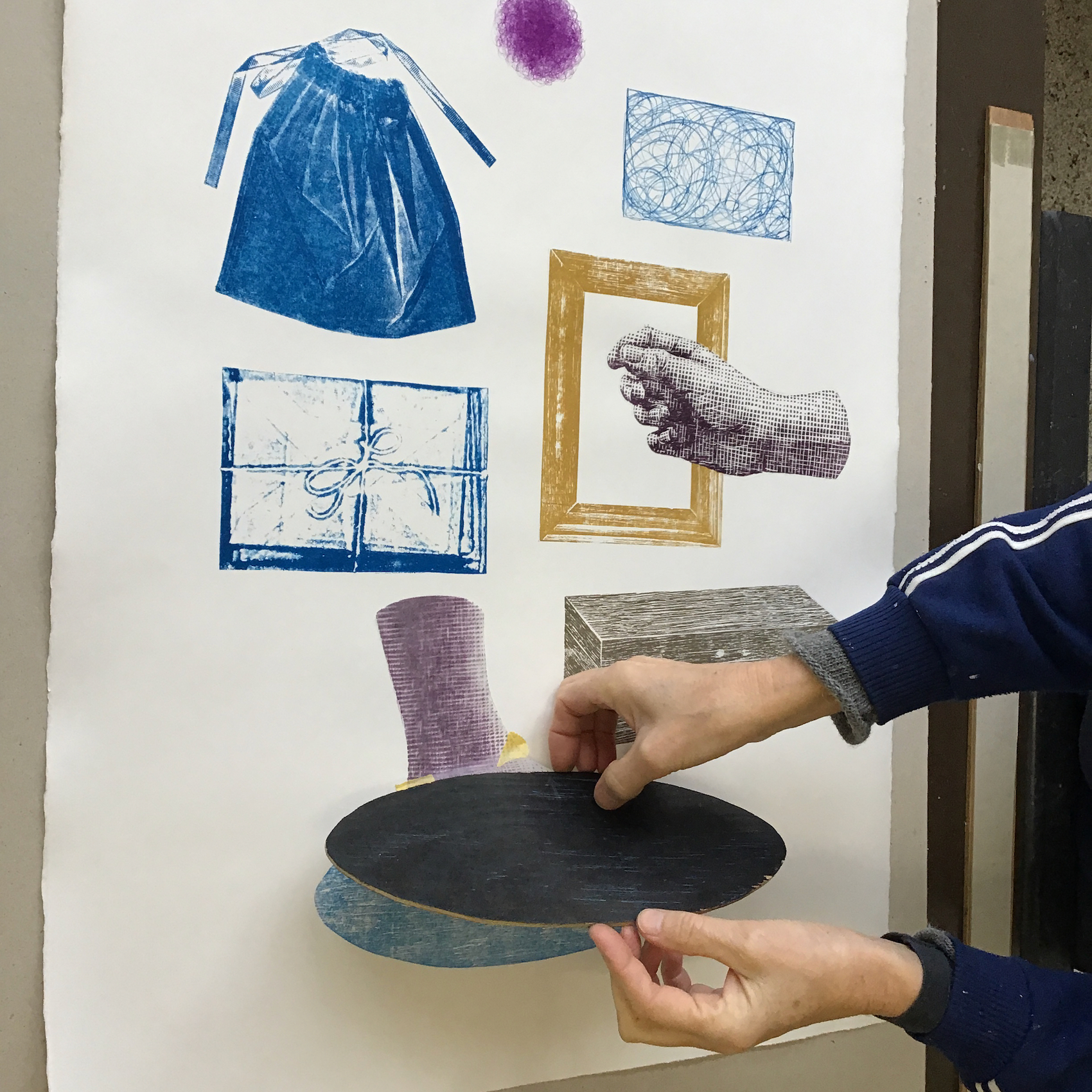 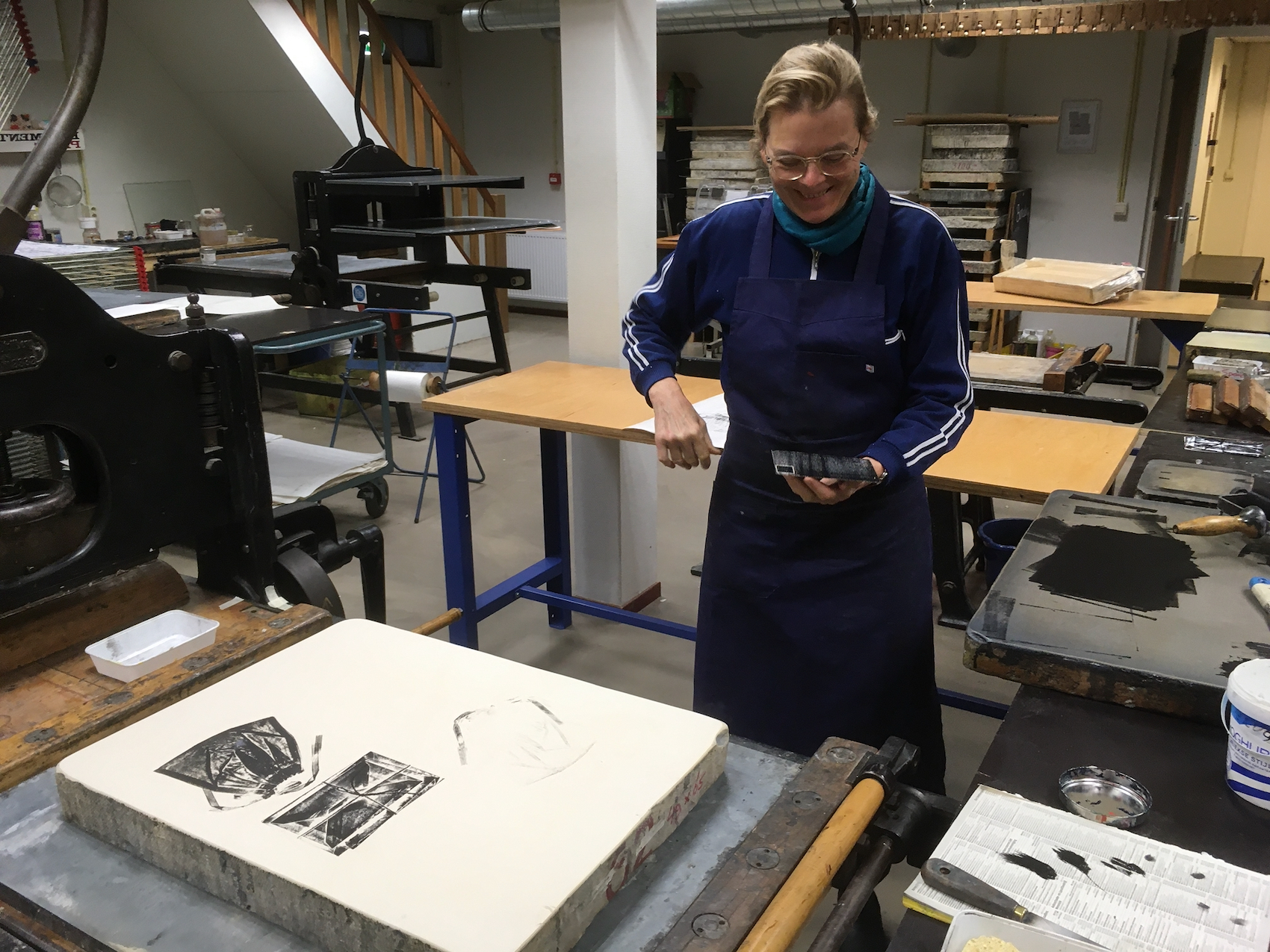 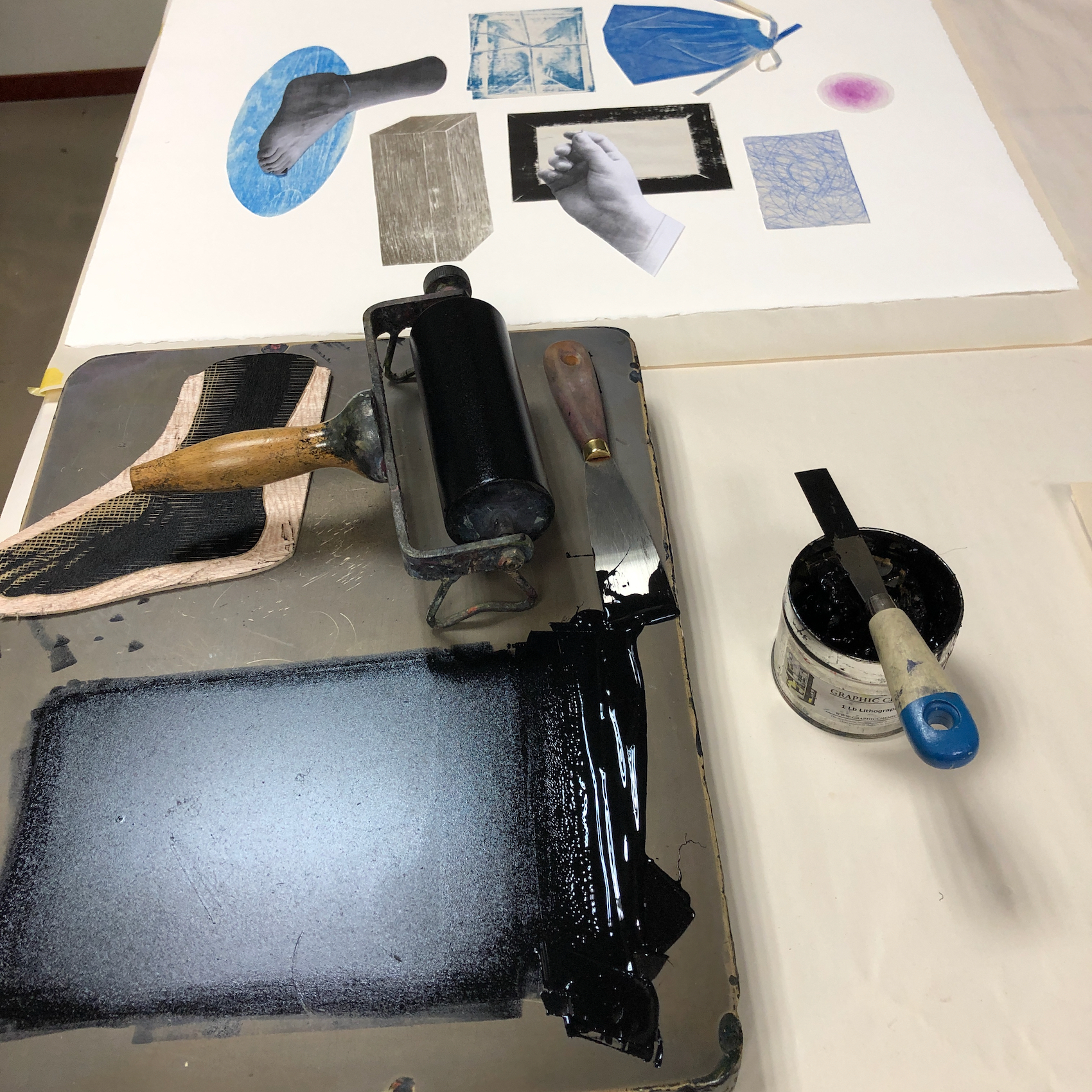 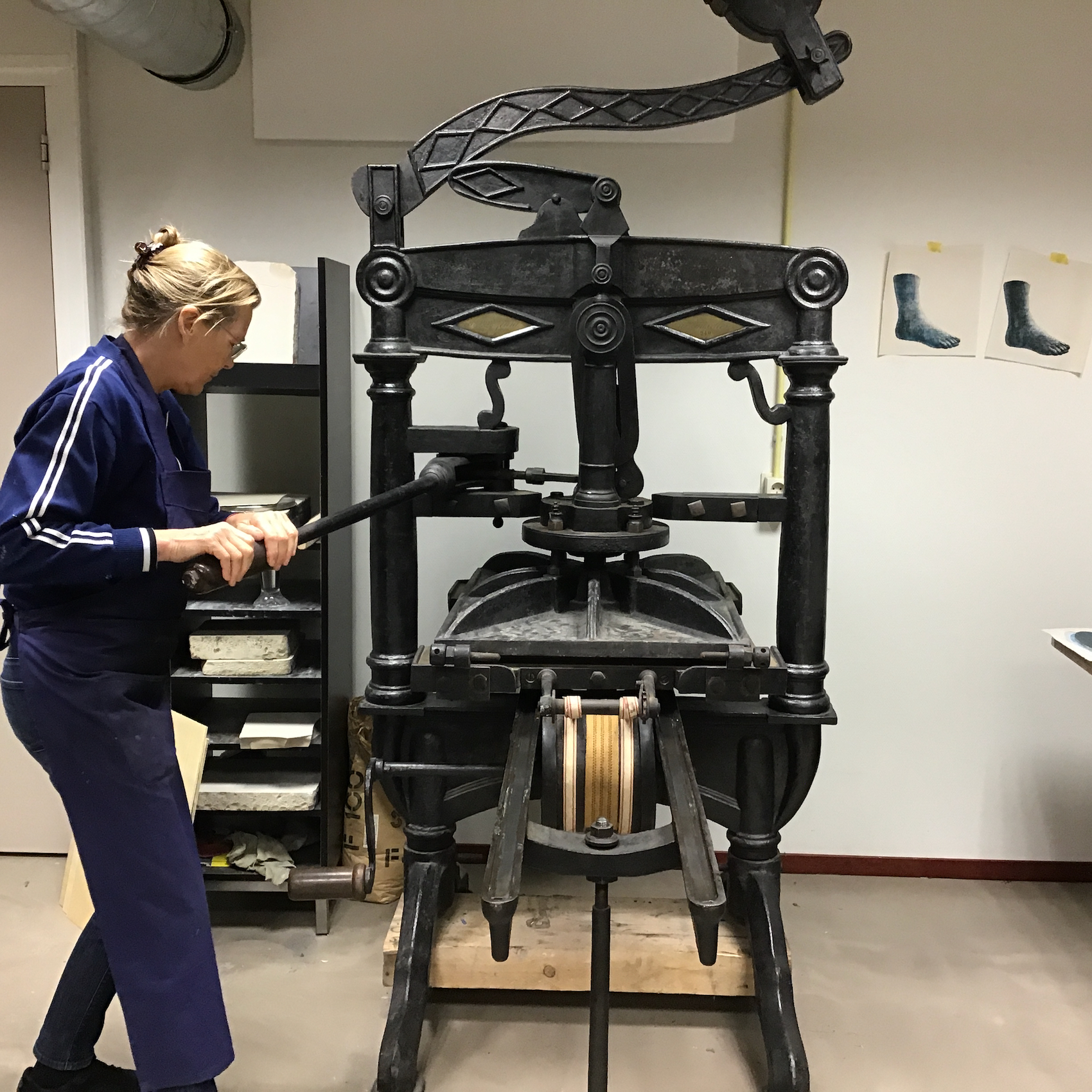